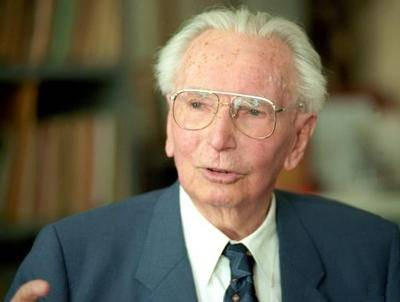 Why This Austrian Continues to Inspire Me

I was visiting the Holocaust Exhibition at the Imperial War Museum and was struck mute by the unfettered brutality visited upon an entire people.

I wasn’t viewing statistics I didn’t already know. These weren’t events I was unfamiliar with. This mechanisation of human slaughter was something I’d read of in my early teens.

But it was the small stories that so moved me. The tiny details and asides that transformed an unspeakable act into something human and near. A young girl’s testimony punched harder than incomprehensible figures ever could. As the equally vicious Stalin once said: “A single death is a tragedy; a million deaths is a statistic.”

As I silently walked the dark corridor through these dreadful times, one wonderful man walked with me.

Viktor Frankl was an Austrian Jew who had survived the Auschwitz and Dachau camps. In 1946 he wrote a masterpiece based on his terrible experiences: Man’s Search for Meaning.

The first section of the book deals with the events he lived through; the second deals with the personal philosophy that arose during those dark experiences. Yet the philosophy is full of light and hope. It begs us to imbue our lives with purpose, to search for a goal that will lift our existence into the profound.

Frankl challenges you to stop asking about the meaning of life, but to find what it is that gives your life meaning. This goal, this purpose, was the foundation to his thoughts about our existence: “In the Nazi concentration camps, one could have witnessed that those who knew that there was a task waiting for them to fulfil were most apt to survive.”

In an age of instant gratification, he foresaw the futility of consciously searching for success and happiness. As he said in 1946:

“Don’t aim at success. The more you aim at it and make it a target, the more you are going to miss it. For success, like happiness, cannot be pursued; it must ensue, and it only does so as the unintended side effect of one’s personal dedication to a cause greater than oneself.”

Go to the exhibition. Read Frankl’s book. Ask yourself what it is that gives your life meaning.

See if what you learn about yourself moves you, like me, to tears.