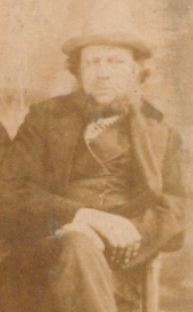 The Remarkable Thing about This Very Unremarkable Man

On Wednesday, 4th April 1883, an unremarkable 59 year old man, overwhelmed by a Measles Virus, died in Adderley Road, Birmingham. At his bedside was his eldest son who had walked over from nearby Alum Rock Road, and stayed with him as his Father’s life ebbed away.

The dead man (pictured right), born in 1823, lived his early life in the Leicestershire village of Croft. From the age of 15, he’d worked as an agricultural labourer. His employer could, without any notice, lower his wages or turn him out of his home if he became too sick to work.

His long, punishing working day often began at 5.00am. The average life span of agricultural labourers at this time was only 45 years.

When the Railways arrived, our unremarkable man was to be found working in Nottinghamshire as a Railway Labourer; this was hard, back-breaking – and occasionally fatal – work, constructing the earthworks, stations and approaches that would be connected by the new trains snaking across the English countryside.

Like so many rural people in the 1850s, this unremarkable man moved his young family to Birmingham. He joined the recently formed Birmingham Police, an occupation so fraught with danger that police buildings resembled prisons, their thick oak doors fitted with iron studs and a grill which allowed those inside to obtain a view without exposing themselves to attack.

Moving his growing family every few years from one set of meagre rooms to another, he and his wife Catherine settled in Aston before moving again to the small house where he would eventually succumb to Rubella.

And what do I read this week? That these are ‘the most challenging times’ for people.

Really? Compared to the man I’ve just described? Year upon year, he knew nothing but the grind of working life. The children of women and men like our unremarkable man often perished before they could even reach adolescence. Hunger, death and disease visited almost every door of the cramped slums and tenements they huddled for warmth in.

How deluded we are. My life is incomparably better than the unremarkable man’s existence I’ve just related. He died of a virus that, today, we have almost eradicated. He lived in houses and rooms that have been swept away and replaced by bright, centrally heated homes set back from the road by pleasant gardens. He toiled physically all his life at tasks we have successfully replaced by machines that complete the monotonous drudgery that was once his lot.

So let’s get real about ‘challenge’. Let’s put what we do and achieve into a real perspective. We have employment laws, robust health and safety legislation and living conditions – for many – which are cornerstones of the rich and rewarding lives we enjoy today.

Why do I know so much about this unremarkable man? Because he was Charles Heath, my Great Great Grandfather. And every time I think about his very remarkable life, I remind myself how grateful I am to be born into the modern age.