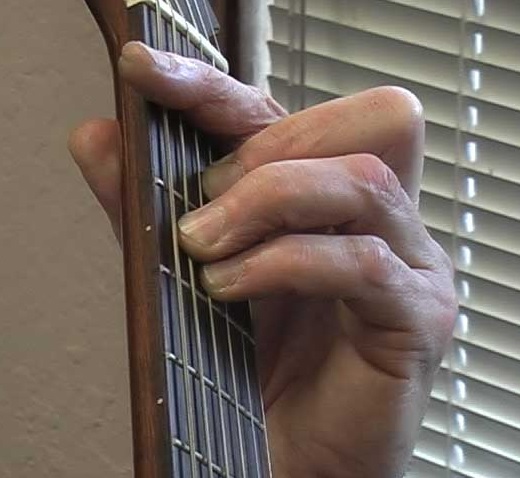 The F Chord of Life

If you’re a guitarist you’ll know exactly what the above title is referring to. If you’re not, then let me enlighten you.

When you first learn to play the acoustic or electric guitar, initial progress is rapid. By placing your fingers on to the strings you can soon make nice noises and even start to croon a few songs you know whilst you play. In time your fingers hold down the strings with such accuracy that you no longer dampen neighbouring strings in the process.

And then you turn the page and there it is: F major. At first you imagine that the photograph is taken from a wrong angle, because you cannot imagine how any human being’s hand can be expected to contort it’s digits in such a painful manner. But no, with increasing dread you realise that the next month or two will be spent in replicating this fingered contortion.

The first challenge is to take your index finger and to place it solidly across all 6 strings. The dead ‘thunk’ that you hear is about as musical as a car crash.

But you persevere. Because you have told so many people that you’re learning the guitar – and had been making such great progress – you’re damned if you’re going to give up now. And session by session, that ‘thunk’ gradually resolves itself into a muted musical sound before – with time – metamorphosing into a pleasing and sonorous chord.

It’s the point at which many people give up. The persistence demanded sorts out the musical wheat from the unmusical chaff. But, like the Israelites, after the sojourn through the punishing heat of the desert, your reward is a promised land of countless musical delights.

I often think that so many things in life have an ’F Chord’ moment. You soldier on; your faith in yourself is sorely tested and the siren song of ‘just give up’ sounds sweet to your ear. But you determinedly struggle forward and, when you eventually triumph, almost want to hug yourself with the satisfaction that came from your achievement.

It was wise old Confucius who reminded us, “The superior man makes the difficulty to be overcome his first interest; success only comes later.” If success is truly to be attained, it will always have its F Chord moment to test us.

And isn’t the success of that achievement, even though so hard won and challenging, music to all our ears?